It’s my pick for Martha Mondays and it fell on the weekend of my birthday, so I figured that I should pick some worthy of such an occasion!

I have loved the idea of cooking this dish for ages, but after seeing Julie & Julia I have wanted a good excuse to cook it.  For simplicity I chose the EveryDay Food’s version which can be found here: http://www.marthastewart.com/recipe/beef-bourguignon-edf

Here’s the thing though.  I don’t think it was any easier than any other stew recipe I have seen.  But boy it was good!

I took on board Julia Child’s direction not to crowd the mushrooms and to put the meat dry before cooking (two things that I didn’t know before and probably still wouldn’t have known).   And I stuck to the recipe except halving it all – we never have eight mouths to feed in this house.

Adding the mushrooms at the end of cooking. 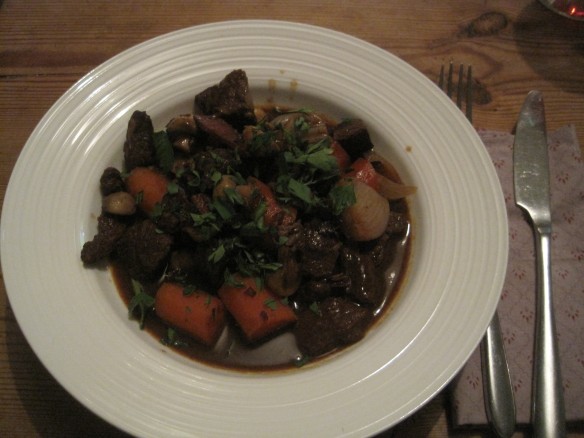 Not the greatest photo I know (I only realised once I had eaten – and then it was too late).  We all enjoyed it in our house.  The gravy was thick and rich.  I will certainly be making this again.  I can’t wait to see everyone else’s results.